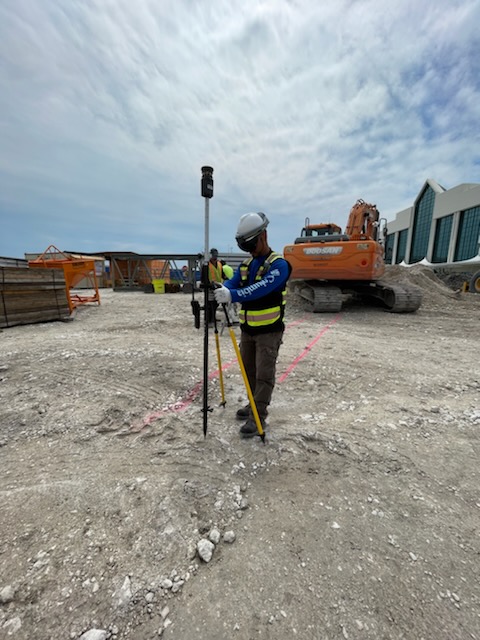 “The visualization is incredible. By having augmented reality pop up in a 3D environment, I could turn around and still see the construction elements I needed to look for and point to lines.”  Andres Sequera, Survey Operations Manager l Power Design, Inc.

Power Design is a national mechanical, electrical, and plumbing (MEP) and systems technology contractor headquartered in St. Petersburg, Florida. The company operates in 20 states across the country on over 300 projects. Power Design has a culture of being tech-forward using apps, technology, and data across various functions which allows them to enhance their communication, accuracy, and speed. Andres Sequera, Survey Operations Manager at Power Design, has a background in surveying and travels across the U.S. to their projects that are utilizing total stations to train employees on the latest layout technologies.

Power Design has traditionally done layout using robotic total stations and measuring tapes. For several years, the company has used technology from Trimble including robotic total stations, scanners, and tablets for vertical construction. This involved laying out points using a 2D model and tablet to match up the points to the design. It required them to go back and forth several times to look at the model and then mark the point on the site.

Power Design’s Virtual Design Construction department works with each superintendent on every project to design drawings as needed. If a total station is involved, they will extract all the points and building images, load them on the total station tablet and then usually have a person in the field or foreman do the actual structural layout - mainly flat decks with points.

Sequera had worked with Building Point Florida (BPFL), a Trimble reseller, to investigate the latest GNSS technology and learned about the new Trimble FieldLink MR for construction layout from BPFL’s Juan Herrera.

As an early adopter of technology, Sequera was excited to be a part of Trimble’s beta testing program for this new mixed reality solution. He worked with Herrera to integrate the data and load files onto the platform and then he, and his colleague Jevon Hemingway, a Survey Specialist at Power Design, began experimenting with the FieldLink MR and the Trimble XR10 with HoloLens 2.

Trimble FieldLink MR offers a new way to perform construction layout, enabling professionals to quickly navigate between points on the jobsite. The application runs on the Trimble XR10 with HoloLens 2, a hardhat-integrated mixed reality device certified for use in safety-controlled environments. FieldLink MR is designed to help layout technicians more easily visualize construction data without having to rely on a handheld controller for step-by-step navigation to locate each point, making the layout process faster and more intuitive. In addition to seeing all these points and being able to navigate the job site more easily, users are also able to see their data in true context to the BIM model allowing them to make more informed decisions on site. However, when needed, the various layers of the model can be turned on and off or made more transparent to safely see both the digital and physical elements on the job site. 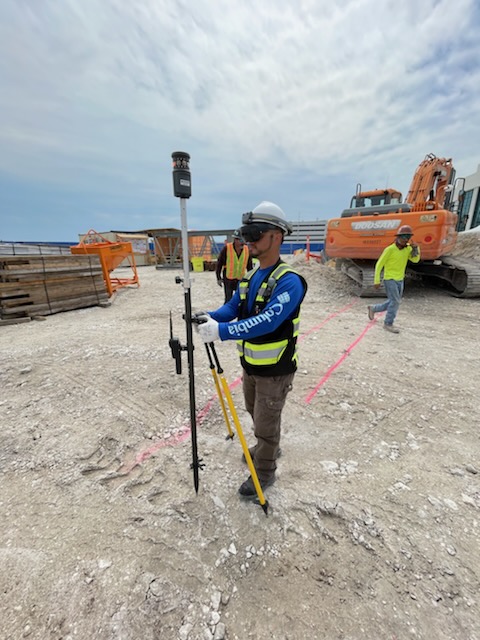 According to Sequera, “The visualization is incredible. By having augmented reality pop up in a 3D environment, I could turn around and still see the construction elements I needed to look for and point to lines.”

Visual cues presented through the mixed reality hardhat naturally lead workers directly to each point for them to physically layout pertinent information on the construction site. Instead of moving around and looking at the tablet and then looking up trying to piece together how the 2D screen relates to the physical world, Sequera was able to see the 3D model in the context of what they were laying out.

“I enjoyed learning the new technology and providing feedback. The model being pinned to the physical world based on total station’s measurements far surpassed my hopes and expectations. The augmented and mixed reality capabilities were much better than I would have expected from a beta product.”

After his experience with the FieldLink MR technology, Sequera is excited and looking forward to adding it to his kit for use in the field as soon as possible. In addition to using it for construction layout on job sites now, he also envisions using it as a training tool to help MEP contractors learn how to use total stations for surveying and layout. “With a tablet, there are a lot of process steps to go through and buttons to push, but with Trimble FieldLink MR, it’s as simple as putting on a hard hat and reaching out and touching elements,” said Sequera.