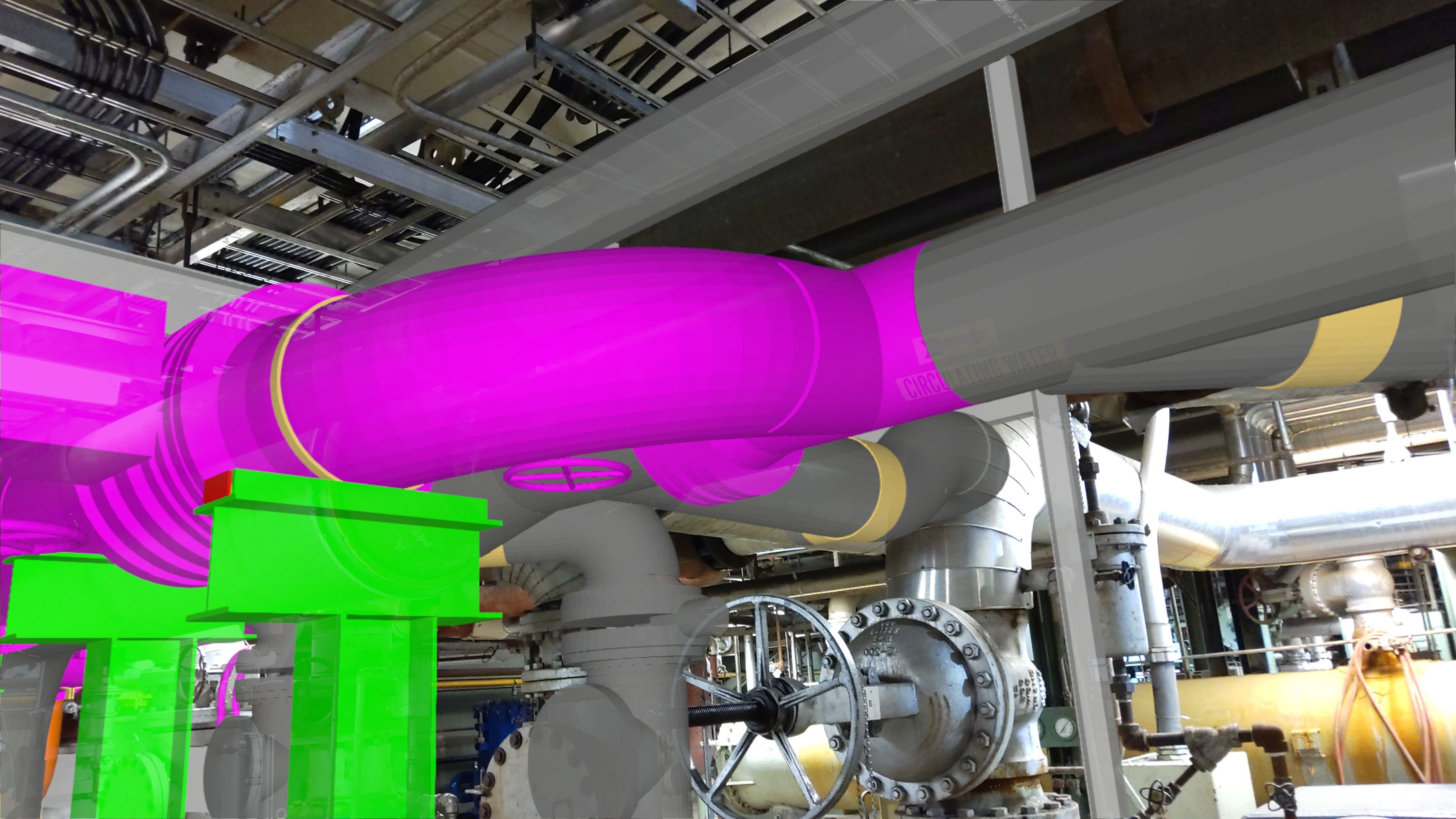 Bowen Engineering is a national contractor headquartered in Indianapolis, Indiana with a focus on industrial and municipal markets including water/wastewater plants and power plants. As a self-performing general contractor, Bowen Engineering completes approximately 80% of the work on its projects, with HVAC and electrical subcontractors being the main subcontract scopes. As the Manager of Corporate Controls at Bowen Engineering, Jared Redelman works with the company’s Virtual Design and Construction (VDC) team, and is responsible for finding and implementing new technology and processes that will improve the company’s performance.

A majority of Bowen Engineering’s work takes place in existing facilities that are already packed with infrastructure making it difficult to find a viable route to install new utilities. The work is often installed in very tight spaces and it can be difficult to accurately verify tie in points and avoid clashes with existing elements in the facility.

Through pre-planning efforts, Bowen Engineering does its best to confirm all tie-in points and field routing prior to releasing the fabrication of materials. Crews take field measurements, review shop drawings/models, and any other information available in an effort to ensure proper installation of the new work.

While this process has proven effective a majority of the time, issues still arise from time to time such as clashes, missed tie-in points, or work areas that are too tight for the trades to install the work. When any of these issues occur, it leads to increased downtime for the crews, possible delays to the project, and often additional money being spent in rework.

Redelman has had his eye on the Microsoft HoloLens since it was first introduced in the construction space in 2015. He got his first glimpse of Trimble Connect for HoloLens and the Trimble XR10 with HoloLens 2 at a conference in early 2020, where he was able to see first-hand how the holographic technology brings the models out of the screen and provides users the ability to engage and interact with design data more intuitively. Redelman knew a mixed reality solution would help his team visualize their designs and drawings in 3D while on the jobsite, and thought this technology could significantly help the company’s pre-planning process and workflow.

Throughout 2020, Redelman and his colleagues at Bowen Engineering worked with local Trimble distributor BuildingPoint Midwest to purchase the Trimble XR10 with HoloLens 2 – and they haven’t looked back. Having the ability to walk through a jobsite and view models in real-time before construction even begins has been a game-changer for Redelman’s project teams.

“We put on the XR10 with HoloLens 2 and right away noticed that one of our T-posts was hitting a valve and needed to be shifted over,” said Colton Motz, project engineer at Bowen Engineering. “It looked clear in the model, but when we walked the site overlaid with the model and could actually see it and touch it, we could see right away that what was in the model wasn’t going to work.”

Bowen Engineering is primarily using the Trimble XR10 with HoloLens 2 as a visualization tool to walk jobsites and see the designs and drawings in real time so they can identify any clashes or constructability issues. This capability is especially helpful in pipe detailing because it gives their project teams the detail and the perspective possible only when they are onsite and before they actually start the work. As it turns out, Bowen’s use of mixed reality technology has paid dividends almost immediately. 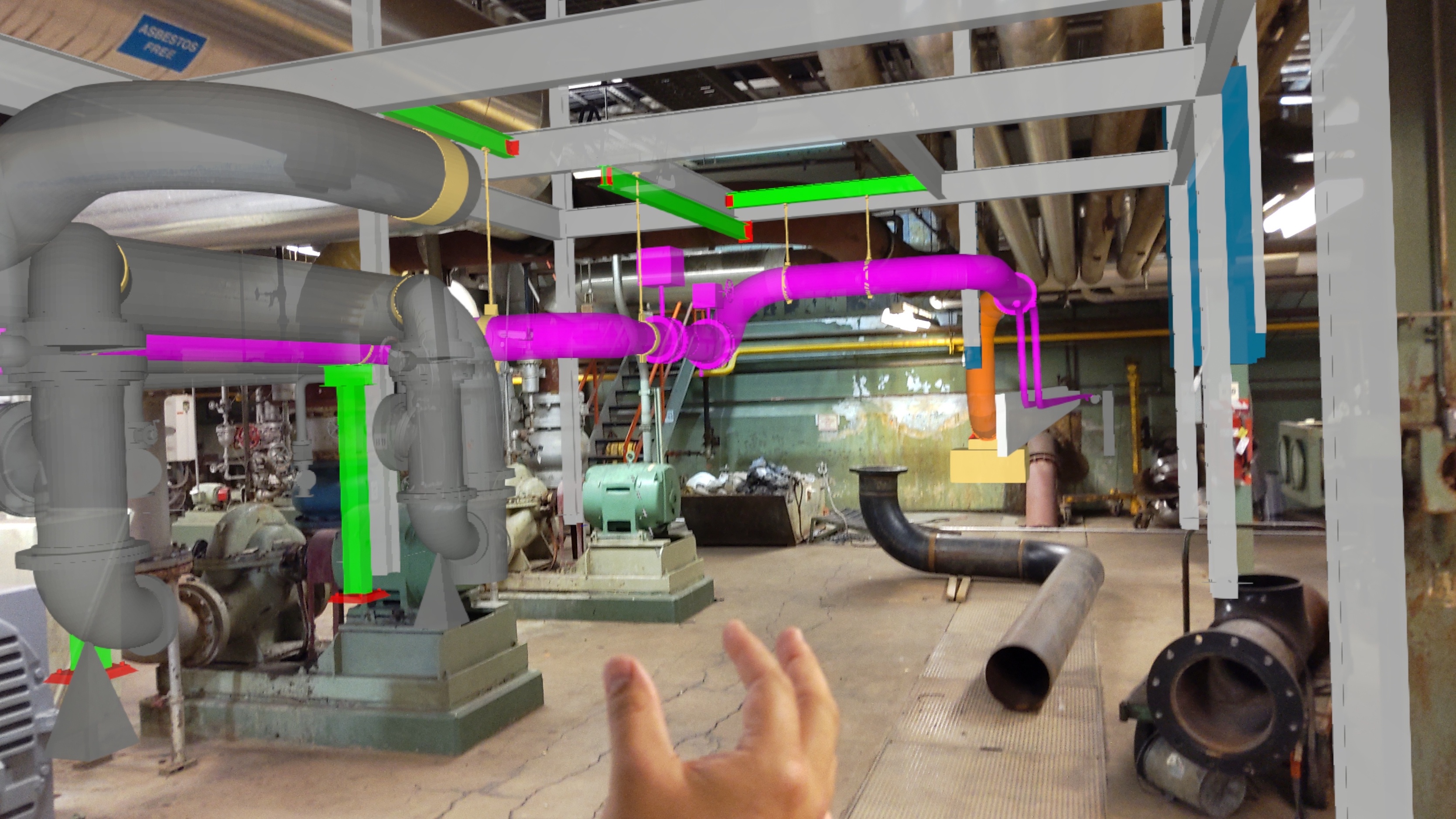 On a recent power plant project in Missouri, Bowen Engineering had to run new piping and add structural steel supports to an existing building. Walking the site with the Trimble XR10 and accompanying Trimble Connect software, project engineers found a clash between the existing structural steel in the facility and a valve in the model. Since the clash was caught before construction had begun, they were able to adjust the model, validate that the environment was 100% accurate, and avoid the entire expense and hassle of correcting the clash during construction.

On another municipality project in Indiana, the Bowen Engineering team was working on a pre-engineered metal building that included HVAC ductwork designed to run along vertical steel columns. Once the building erection began, the Bowen Engineering VDC team visited the site with the XR10 to ensure that their design would fit in practice. After walking through the building, they noticed a number of conflicts between the ductwork and the structural steel. As one example, there was ductwork designed to run directly next to the vertical steel columns on the exterior walls of the building. When the steel elements of the building were modeled, the model didn’t reflect a number of small steel supports that ran at a 45-degree angle from the vertical columns back to the exterior walls. Using the XR10, it was apparent that the ductwork, as designed, was going to be running directly through the angled supports. Upon early discovery of the issue, Bowen Engineering was able to work with the HVAC subcontractor and eliminate the clash in the design before any ductwork had even been fabricated.

“It really blows them away when they can view a model of the finished project within the actual environment they will be working in,” said Redelman of the Trimble XR10, which is the only HoloLens 2 solution compatible with an industry standard hardhat and certified for use in safety-controlled environments.

Although it provides extreme value in the field, the mixed reality solution also eases the process of sharing project information with those in the office. The Trimble XR10 comes integrated with Trimble Connect for HoloLens software, which is part of the collaborative Trimble Connect cloud platform enabling stakeholders across a project to coordinate all of their different types of design files together in a common location.

In the past, Bowen Engineering typically used model information for reference only. Now, the XR10 brings the access and value of the model to an entirely new level, enabling the contractor to realize the true value of their investment in BIM. Within just the first few weeks with the XR10, the company’s project teams were able to see firsthand the value of the XR10 and recognize its ROI. For customers in the construction industry, where schedule delays and inflated costs due to rework are all too common, the price point of mixed reality technology is low enough that it doesn’t take long before the cost is recovered.

Bowen Engineering estimates that the piping issue discovered in the Missouri power plant would have impacted the project with an additional 16 - 24 hours of crew time between delays and rework. This would have translated to over $4,000 in labor costs alone. On the project in Indiana, the HVAC crew would have encountered over 20 hours of impact between delays and rework of the ductwork, issues that would have translated to over $4,500 in additional labor and material costs.

It probably goes without saying that, according to Redelman, the Trimble mixed reality tools have received an enthusiastic buy-in across Bowen Engineering.

What does the future hold for Bowen Engineering and mixed reality?

As to next steps, Redelman plans to expand their use of the XR10 and Trimble Connect for prefabrication over the coming months. The company already does a lot of prefabrication work, and he has seen demonstrations of how field workers can leverage the mixed reality overlay to instruct them on how to perform efficient, quality, and safe fabrication tasks on and off the jobsite. Using 3D technology eliminates the flaws in fabrication derived from misinterpreting design intent through examining 2D blueprints, and by providing precisely overlaid and sequenced instructions, any room for interpretation is removed from the process. He envisions using the technology to prefabricate a number of different components, like pipe racks and rebar cages, using the mixed reality to build full scale assemblies from a model loaded into the XR10.

In addition, Bowen Engineering plans to get more field staff involved in using the mixed reality technology during the pre-planning process and for hosting constructability review meetings with others offsite. For design/build scenarios, they plan to give clients the ability to “walk through” the plant for design review meetings.

“It has always been difficult to truly visualize construction work until it’s actually complete,” said Redelman. “Now that there is technology available to view construction concepts in 3D, the use cases seem limitless.” 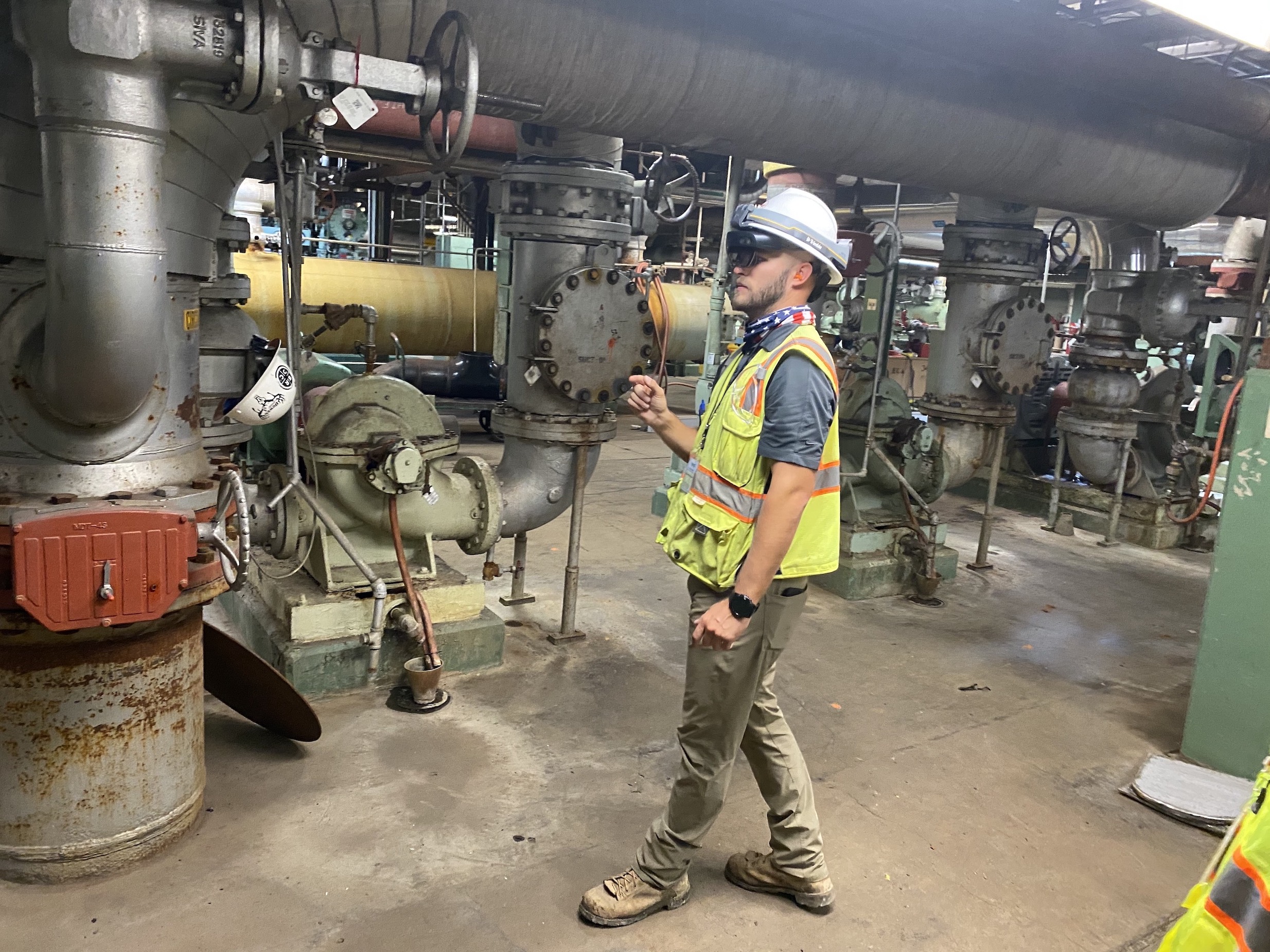